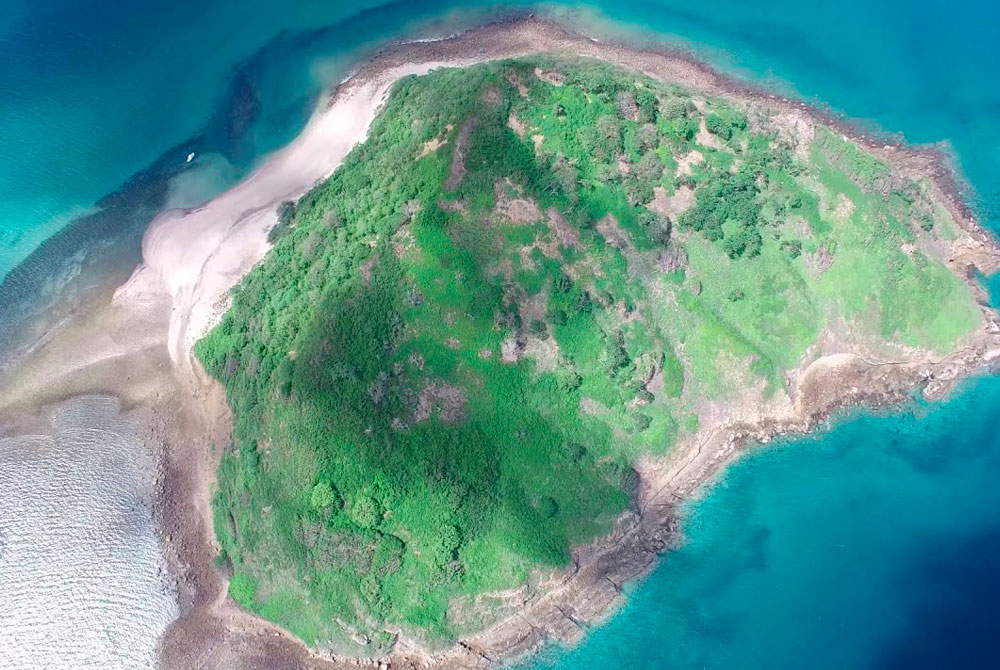 Costa Rica is small in size, but it is big on the diversity of places to visit on and off the beaten track.  While this bucket list destination is well known for its live volcanoes, lush rainforests and beautiful beaches, Costa Rica has lots more to explore! One of these remote and untouched gems is a small island on the far northern Pacific coast. Let´s learn 5 Fun Facts about Isla Bolaños!

Guanacaste is bordered by the Pacific Ocean and the Guanacaste Volcanic Mountain Range to the north. It is located on the Nicoya Peninsula and is the oldest geological region of the country. Crops and cattle farming extend over the tropical dry forest plains. It is also home to the Guanacaste International Airport (LIR) hat services the region and daily flights from the major US hubs making getting here extremely easy! Just pick up your Poas Rent-a-car just minutes from the terminal and you are off!

To the far north of Guanacaste, you will find the historic Santa Rosa National Park that forms part of the Guanacaste Nature Conservation System. It protects some of the last remaining tropical dry forests in the world and has some spectacular beaches too. It is also where the famous battle against the US mercenaries occurred and where the now Costa Rican national hero, Juan Santamaria came to be.

It is also home to Isla Bolaños or Bolanos Island that sits off the far northern coast of Guanacaste and Costa Rica.  While small in size, it is big on possibilities and owns some fun facts that makes it stand out in the ocean.  Enjoy a 25 minute scenic boat ride from the mainland to reach the island and its small rocky hill that stands just 81 meters high and that sets the scene for some very interesting nature-rich occurrences. Here are some of them!

Isla Bolaños is a special place for a number of marine birds, the reason behind Costa Rica declared it a wildlife refuge back in 1981. It´s strategic location and climate conditions converts this little landmass into a sanctuary for three bird species in particular.

2.    You can see three volcanoes from the beach

At low tide, Isla Bolaños is dotted with white-sand beaches that extend out of the pristine, turquoise-colored water. This combination guarantees a paradisiacal beach and swimming experience just in itself.

What makes the Isla Bolaños beach day even more stunning is that thanks it its strategic position off the far northern, Guanacaste coastline is that three volcanoes can be observed from a distance.  The Orosi, Rincon del Vieja, and Cacao volcanoes can be seen in the distance, and they are impressive. While the Orosi and Cacao volcanoes are extinct, the Rincon de la Vieja Volcano is very much alive and likes to remind us of its existence once in a while. This volcano´s slopes are also a very popular place for adventure activities and the thermal springs.

Isla Bolanos belongs to the network of protected lands that presently covers 25% of Costa Rica.  Thanks to its importance for marine birdlife, this little hill in the ocean was designated as a wildlife refuge back in 1981 and is now part of the Santa Rosa National Park. This park is easily reachable by car with ample parking so that you can explore the park and its historical treasures on foot.

Costa Rica began creating its network of protected land in the early ‘70s and now boasts nearly a quarter of the country and nearly a third of its marine area within this network. No small feat for a small country but just one example of how Costa Rica has shown the world that conservation and preservation can be sustainable.

4.    It is a great place to do Wind Surf, Kayaking, and Kitesurfing!

The bay area in which Bolanos Island sits is a favorite for windsurfing and kitesurfing. Salinas Bay is rated as the 8th windiest place in the world which translates to perfect conditions for kitesurfing and windsurfing.

Isla Bolaños has a beautiful white-sand bar that creates butter flat water which is just what kite surfers look for so bring on the wind and the flat water conditions that the bay provides.

For kayaking, the warm protected waters of the bay and around Isla Bolaños will give you beautiful views of the island, the stunning coast, the volcanoes in the background, and of course, the bounty of birdlife that has chosen Isla Bolaños to nest.

Isla Bolaños is one of the driest areas of Costa Rica receiving around 1.5 meters of rain a year. This ultimately influences the vegetation that can be found on the island which is why the pelicans and frigates come to the island to nest.

The lack of rain creates a dense dwarf forest with trees that provide fruits for the birds but also the possibility of building their nests in the forest canopy when the time comes.

This little island offers the perfect conditions for these birds to reproduce, nest, and rear the next generation of these feathered friends. Nature is wise, without a doubt.

Poas Rent-a-car will take you to the farthest corners of Costa Rica. With its fleet of over 200 cars ranging from sedans to Premium SUV´s, there is an off-the-beaten track for all of them and for you to explore.  The far northern Pacific Ocean coast is one of them and the Isla Bolaños one of its treasures. Book your Costa Rica vacation car now and Poas rent-a-car will take you everywhere. Copyrights @ All Rights Reserved by POAS